What is surgical ablation? 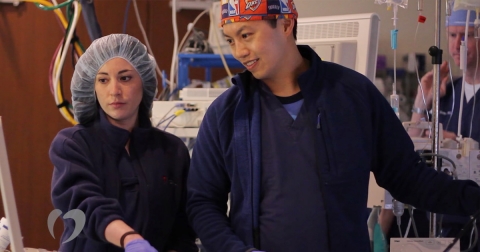 Surgical ablation is a procedure used to treat atrial fibrillation, the most common type of irregular heartbeat. Atrial fibrillation, also known as AFib, is generally not a life-threatening condition on its own, but it puts patients at greater risk for stroke. Symptoms may include shortness of breath, fatigue, light headedness, dizziness and heart palpitations — all of which can impact your daily life and activity level.

Initial treatment options for AFib include blood thinners to reduce the risk of stroke, antiarrhythmic medication to help the heart stay in normal rhythm, cardioversion to reset the heart rhythm, or a catheter ablation. A catheter ablation uses long, thin wires inserted into the groin and through the veins to the heart. Heat or freezing techniques are then used to destroy the abnormal heart tissue that causes the irregular heart rhythm.

Some patients, however, do not respond well to initial treatment options. They may have other medical conditions that prevent the use of blood thinners or antiarrhythmic medications, or they may fall into the small percentage of people for whom catheter ablation is not successful. For patients who have tried other treatment options and still experience regular occurrences of atrial fibrillation, the final treatment option is surgical ablation.

Physicians at the Oklahoma Heart Hospital perform two types of surgical ablation: a convergent ablation (sometimes referred to as a hybrid ablation) and the Cox Maze IV ablation. Surgical ablations intentionally create scar tissue to block the abnormal heart rhythm from affecting other areas of the heart, in contrast to a catheter ablation, which identifies and destroys abnormal tissue that is causing the irregular heart rhythm.

Unlike the catheter ablation, which may only require an overnight stay in the hospital and about a week of recovery time, both the convergent ablation and Cox Maze IV ablation requite a longer stay and are more invasive surgical procedures. Both require general anesthesia for the patient and a longer recovery time before returning to normal activity.

Like catheter ablation, surgical ablations can be a life-changing procedure for individuals whose quality of life has been impacted by persistent atrial fibrillation. If you experience side effects of AFib and initial treatment options have not been successful, contact the Oklahoma Heart Hospital for more information about surgical ablation and whether it is right for you.