Types of Ablations to Treat Arrhythmia 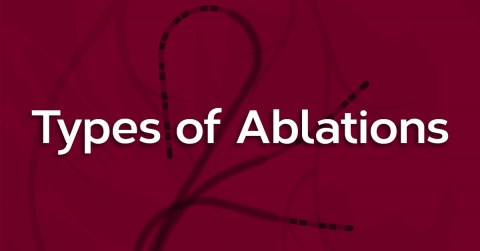 Ablation is a treatment that involves removing or destroying problematic, abnormal tissue. For some cardiac patients, the procedure can provide the best chance at reducing symptoms or even offer a complete cure and return to normal life. Ablation can be done using cold therapy, heat, lasers, or chemicals, depending on the type of tissue being destroyed.

What heart conditions does ablation treat?

While ablation is used to treat many different conditions throughout the body, in the field of cardiology, ablation is most often used to treat arrhythmias. Mild arrhythmias often can be treated with medications. If medication can’t sufficiently treat the abnormal heartbeat, doctors may recommend ablation. In some cases, an abnormal heartbeat may be serious enough for a doctor to recommend ablation from the beginning.

Cardiac ablation procedures generally fall under one of two categories: catheter ablation or surgical ablation. In catheter ablation, a small, flexible tube called a catheter is threaded through a vein in your leg or chest and into your heart. The tip of the catheter is outfitted with a tool that ablates the abnormal tissue, either with heat or by freezing, to restore the normal heart rhythm.

A catheter ablation is minimally invasive, and the risks include bleeding at the entry site, infection, blood clots, stroke, or damage to the heart valves or muscle. Most patients who receive catheter ablation can go home the same day. Catheter ablation has up to a 95% success rate at curing the arrhythmia.

Sometimes a patient does not respond to other treatment options and a catheter ablation fails to adequately treat the condition. In those cases, the specialists at Oklahoma Heart Hospital may recommend a surgical ablation. During a surgical ablation, the chest is opened to access the heart and destroy the abnormal tissue.

The two types of surgical ablation used at OHH are convergent ablation and Cox Maze ablation. Convergent ablation is a hybrid between full surgical ablation and catheter ablation. Incisions are made in the chest area, and a catheter is used to treat the heart from both the inside and the outside. This surgery is less invasive than a Cox Maze ablation, but the patient will still have to recover for several days in the hospital before discharge.

Ablation is a common and effective treatment for many types of arrhythmias that are not corrected by medication and lifestyle changes alone, and ablation often results in a complete cure of the abnormal heart rhythm. If you have questions about a recommended ablation procedure, contact Oklahoma Heart Hospital to schedule an appointment with one of the specialists in our Heart Rhythm Institute.