OHHRF Clinic for the Uninsured
Posted on February 20th, 2020
At Oklahoma Heart Hospital, we recognize that lack of insurance can be a barrier to healthcare for many people in our state. That’s why we created the Clinic for the Uninsured. The concept came about through partnership between the Oklahoma Heart Hospital Research Foundation (OHHRF) and Mercy Hospital when they realized the need for specialty care for uninsured patients. While primary care... Read More
Common Types of Deep Vein Disease
Common Types of Deep Vein Disease
Posted on August 20th, 2019
You can see some veins on yourself or other people pretty easily, but the visible blue veins under the skin are only superficial veins. Like an iceberg, most of your veins lie beneath the surface.  The ones that you can see only carry about 10 percent of your blood on its journey to the heart. The other 90 percent of the blood runs far beneath the surface in your deep veins, and there are... Read More

Oklahoma Heart Hospital Ranks as Nation’s Top 50
Posted on December 18th, 2017
OKLAHOMA CITY (Dec. 18, 2017) – A relentless pursuit of excellence in cardiac care has once again earned the Oklahoma Heart Hospital (OHH) a national ranking as one of 50 top cardiovascular hospitals by IBM’s Watson Health study, previously known as the Truven Health Analytics study.     "Although this is the fifth time OHH has been ranked one of the top heart... Read More

Using stents to treat chest pain
Posted on December 1st, 2017
A recent study published in The Lancet medical journal resulted in news headlines that stents may not be effective for treating patients with chest pain. But as with any medical study, it’s important to examine the size of the study, the way that it was conducted, and the statistical significance of the data before changing any guidelines about patient treatment. Stents are small wire... Read More

Automatic External Defibrillators (AED) in Public Spaces
Posted on April 15th, 2017
In recent years, the presence of automatic external defibrillators (AEDs) in public spaces like schools, athletic complexes, and even shopping malls has increased. An AED is a portable device that scans a person’s heart rhythm and sends an electrical shock to try and restore a normal heart rhythm. It is similar to the electric shock given by first responders or doctors, except that the... Read More

Bystander CPR: Improving the Chance of Survival
Posted on April 1st, 2017
When someone’s heart stops suddenly, vital organs like the brain no longer receive oxygen because blood is not moving through the body. The use of CPR (cardiopulmonary resuscitation) as soon as possible after the heart stops can save a person’s life because it continues to circulate blood through the body until emergency medical personnel arrive.  The Oklahoma Heart Hospital offers a... Read More

What is an Electrocardiogram (ECG)?
Posted on March 15th, 2017
An electrocardiogram (ECG or EKG) is a common tool used to diagnosis and assess heart conditions. It’s a road map of the electrical activity in the heart that a physician can follow to see what is or isn’t working properly.  The ECG can present different patterns, but the more important use is identifying why a certain pattern has developed. At the Oklahoma Heart Hospital, ECGs... Read More

Arrhythmias in the Upper Chamber of the Heart
Posted on March 3rd, 2017
SVT (supraventricular tachycardia) is a general classification of heart rhythm issues that occur in the upper part of the heart (the atria). As with other heart rhythms, SVTs occur because of a disruption in the heart’s normal electrical rhythm. Symptoms may include heart palpitations, light-headedness, dizziness, shortness of breath, fatigue, or passing out.  Atrial fibrillation (AFib) is... Read More

OHH Physicians Bring His-Bundle Pacing to Oklahoma
Posted on December 5th, 2016
In November, physicians at the Heart Rhythm Institute at the Oklahoma Heart Hospital became the first in the state of Oklahoma to use His-bundle pacing (HBP).  His-bundle pacing uses the same pacemaker as in a typical pacemaker placement, but utilizes a specialized screw-in lead placed in the His bundle rather than in the right ventricle. The His bundle is a bundle of cardiac fibers... Read More 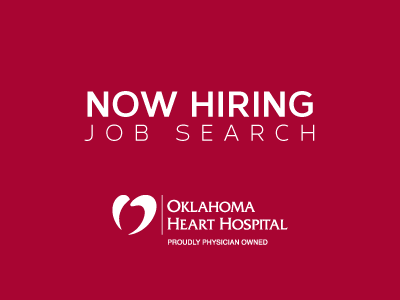