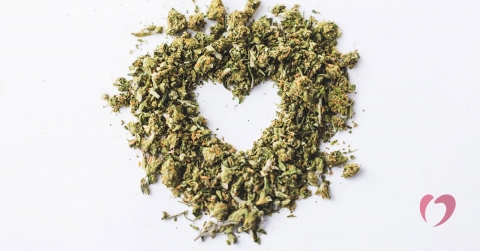 Marijuana is one of the most commonly used drugs in the United States. While some view it as a safe substance, it’s important to understand how marijuana impacts heart health, especially for those living with heart conditions. As with many areas of heart health, more study is needed to fully understand the potential risks.

Some studies have raised red flags about potential increased risk for heart attack and stroke among marijuana users, as well as drug interactions with medications commonly prescribed for heart diseases. Studies by the American Heart Institute have indicated potential harm associated with cannabis use, though the studies also showed some conflicting results, and thus more study is needed. One study showed an increased risk of heart attack among marijuana users, but also a decrease in several risk factors for heart disease, including hypertension, cholesterol, and diabetes.

We have known for many years the effects of tobacco use, particularly smoking, on the heart, and there is concern that smoking marijuana has similar effects. Smoking narrows the blood vessels surrounding the heart, which requires the heart to pump harder. Some studies in animals have indicated that it also reduces the pumping power of the heart.

Cannabis use has also been linked to a higher occurrence of arrhythmias and stroke. For those with existing arrhythmias, cannabis may worsen the abnormal heart rhythm. Directly after smoking or consuming cannabis, there is a strong and direct association with increased blood pressure. Some experts point to this as an increased risk of heart attack during that time period, though there is indication it may be within the range of blood pressure fluctuation experienced in a normal day.

Because cannabinoids affect a particular enzyme in the liver, marijuana use may interfere with some heart medications by changing the way these medications are processed in the body. Potential interactions include immunosuppressants taken by transplant patients, beta blockers, statins, nitrates, blood thinners, and calcium channel blockers. If you have a prescription for any of these medications and use cannabis products, be sure your doctor is aware of your marijuana use.

While medical marijuana may be recommended by some physicians for patients with seizures, chronic pain, or other diseases, the risk to the heart remains unclear and more research is needed to better understand the effect of marijuana on the heart. If you are a marijuana user with heart disease or other medical conditions, be sure you talk to your doctor about your marijuana use and any potential side effects or drug interactions that could occur.